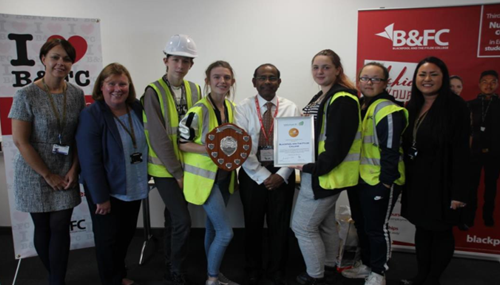 A group of Blackpool and The Fylde College students have been thrust into the national spotlight after producing a rap to highlight health and safety issues in the workplace.
The Dust ‘n’ Boots rap, by Construction students Katie Kennedy, Megan Cook, Jordan Cook and Krystalea King, was one of a number of projects created by different B&FC curriculum areas for the national Learning Occupational Health by Experiencing Risk (LOcHER) project.
The rap was voted B&FC’s winning entry and a video of the students’ performance has since been played to MPs in Parliament and at the Health and Safety Executive (HSE) Annual Conference at the QEII Conference Centre in
Westminster.
They are now due to take the stage at health and safety events around the North West to perform the innovative rap.

Megan, 18, from Blackpool, said:
“We all sit in my car and play tunes and sing and rap so this felt like a good thing to do. We also wanted to do
something which reflected each of our personalities and it’s given us all lots of confidence.”

Katie, 17, also from Blackpool, added:
“They’ve played it in lots of places. It was used during College induction this year and I keep having people coming up to me and saying they saw me in the video.”

Other B&FC LOcHER projects included Computing producing comic book strips to warn people of the dangers of using IT and Creative Arts producing a red and green traffic light system to alert people to safety issues in a workspace.

Construction tutor Rosalind Tsang said:
“The students really embraced this project and as someone who enjoys rap music I was able to provide some guidance and help with the lyrics. They could have done something related to their course but felt they wanted to do something completely different to incorporate their personal interests into this College project. They have had some great feedback. The HSE were really impressed and have invited the students to perform at some
events in the coming months.
Health and safety in the workplace is so important and this project has really driven that home for the students.”

All the students who took part in LOcHER projects were presented with a certificate by Dr Bob Rajan Sithamparanadarajah, HM Principal Inspector of Health and Safety, at an event at B&FC’s new Lancashrie Energy HQ this week.
B&FC Principal and Chief Executive, Bev Robinson OBE, was also presented with an award to mark the College’s commitment to the LOcHER project.

Joanne Shepherd, Health and Safety Manager at B&FC, added:
"The LOcHER project is so important to promote health and safety in the workplace and I'm delighted B&FC students and staff have embraced the initiative. I know from speaking to health and safety colleagues how impressed they have been by some of the students’ ideas and our Construction team have already performed their rap at a number of events and had some fantastic feedback. I'm looking forward to seeing the innovative projects our students come up with in the future." 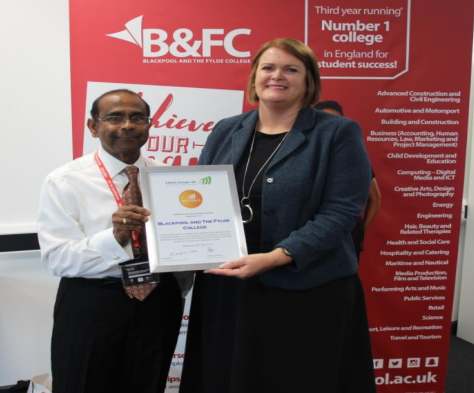 Students who produced the rap