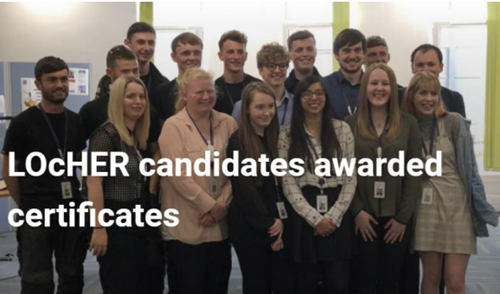 On Thursday 19 July, a group of school and university interns and apprenticeships who had successfully
completed a LOcHER project were awarded with certificates to recognise their participation in the project at
TechnipFMC.
TechnipFMC are a massive global organisation and at the site in Dunfermline, they run a Career Ready intern
programme with local schools designed to help young learners get ‘work ready’. John Johnston, Health and
Safety Manager at TechnipFMC was able to enlist the help of four High School pupils who were on four weeks
work experience, four University students who were on work experience and four employed apprentices.
None of the groups knew each other and even some of the smaller groups had never met before this project
started.
The project idea was initiated by one of the school pupils – Shannon – the youngest one of the project team.
There were 17 young people involved in the project, which included four career ready school pupils from
different local schools, three university interns and the rest were apprentices.
Using some historic accident footage and accident figures, their LOcHER project was on the procedure for safe
lifting using hoists, cranes etc.
Five members of the LOcHER UK steering group attended the session. The project team presented their
LOcHER project to the SG members and the senior management team at TechnipFMC.
Dave Foy presented certificates to all of the project team members. LOchER certificates were also presented to
John Johnstone for getting the young people involved in LOcHER and to TechnipFMC as they are the first
workplace to run a LOcHER project within the UK.
The group delivered a powerful and inspiring session starting off with ‘what is LOcHER?’, explaining the
benefits of using the LOcHER project approach with reference to the 5 R’s (Recruitment, Retention, Results,
Recognition and Rewards) and how they had decided on the scope of their LOcHER project.
The group presentation of their LOcHER project was just over 30 minutes and included videos, public speaking,
demonstrations. All delivered in a very simple but effective way.
The session was well recorded by the company, members of CDN Health and Safety steering group and, also by
the Dunfermline press. The company announced after the student presentation that they would continue
running LOcHER projects within the company and intend to run two LOcHER projects each year moving
forward.